Skip to content
What method of execution in history makes your hair stand on end? 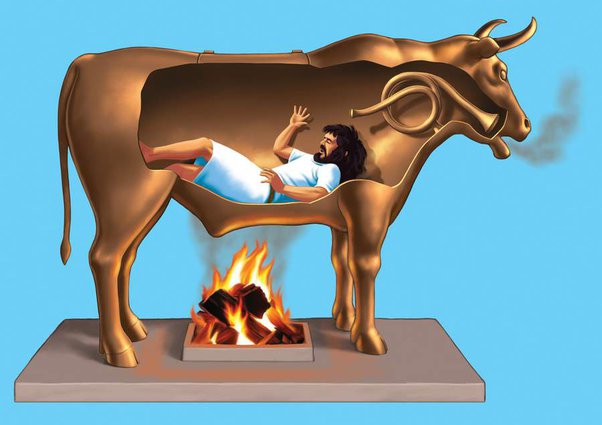 It was allegedly used as a method of execution in ancient Greece. Frankly put, the Brazen Bull was comprised of a bronze, hollow device shaped exactly like a bull.  It was like a metal oven ,It had a small door on one side, where you could lock in an unfortunate prisoner. Apparently, the Brazen Bull was modelled to be the exact same size as a real bull, with an intricate acoustic mechanism inside it that would make the screams of agony sound like the bellowing of a bull. When the bull was opened, the victim’s scorched bones “shone like jewels and were made into bracelets”.

You might be wondering, what makes a person scream when inside the bull? Well, a fire is lit underneath the bull, literally roasting the person inside to death.

However, it’s not all grim and death with the Brazen Bull. There’s actually an interesting and amusing story that goes along with it:

The concept of the Brazen Bull was invented by the well-known Athenian bronze-maker: Perilaus, as a way to execute criminals. He presented this idea to the tyrant of Acragas, Phalaris, and also informed him that the screams would sound like the “most melodious of bellowings”. Perilaus expected to be rewarded for coming up with this unique method of execution, however all he got in return was getting tricked to go into the bull and was immediately locked inside. Disgusted by the design, Phalaris wanted to use him to test the sound system of the bull, and thus a fire was set underneath. And thus, Perilaus, the inventor of the Brazen Bull, ironically became its first victim.

Before Perilaus died in the bull, he was taken out by Phalaris, only to be taken to the top of a hill and subsequently thrown off, killing him.

But the story doesn’t just end here. Phalaris himself was said to be thrown in and killed by the Brazen Bull, when he was overthrown by Telemachus. 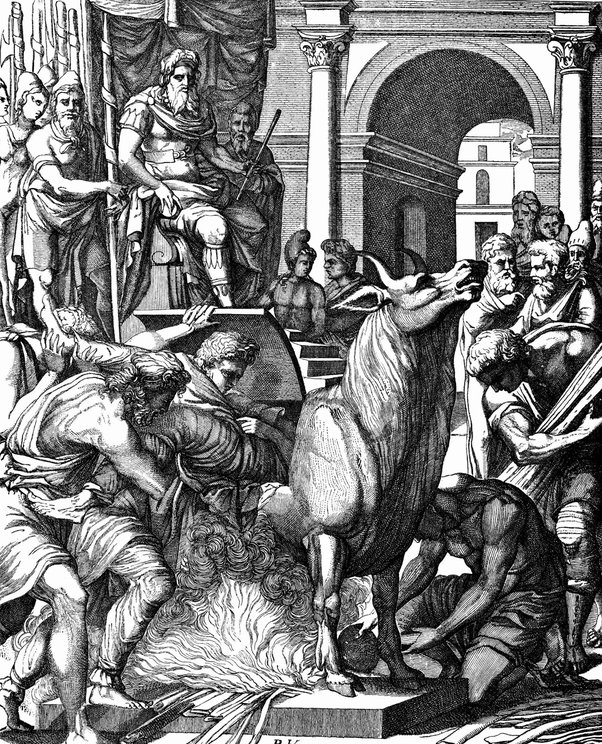 I guess the moral of the story would be not to get too absurdly creative with these torture devices, and to definitely not tell your local tyrant about it.