I think OP is not interested in aliens or other BS, so I’ll stick with actually strange but completely natural and explainable findings.

During one of the many, many Roman-Persian Wars (66 BCE – 628 CE) there was a battle in the year 256 CE for a now abandoned Syrian city named Dura-Europos.

Now in ruins, Dura-Europos was back in the day a very active and important trading city of Roman Syria, and the Persian Emperor Shapur I wanted it, so he send his army to lay siege of the city.

While exploring the ruins, archaeologists found a series of strange tunnels below the old wall, and in one of the tunnels, there were the remains of 19 men who seemingly had died while trying to escape from something. 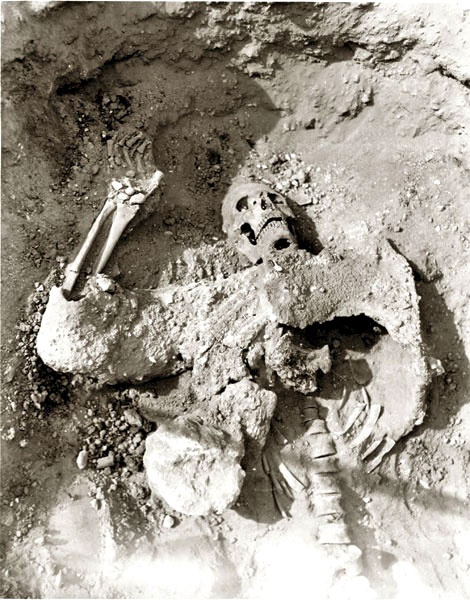 One of the French excavators of Dura in the 1920s and 1930s, Robert du Mensil du Buisson, himself a military officer, concentrated especially on the remains of the final siege. In a narrow, low gallery under Tower 19, he discovered dramatic evidence of combat and death underground:

Here, lying in a Roman countermine intended to disrupt Sasanian attempts to undermine or sap the city defenses, du Mesnil found a tightly packed tangle of up to 20 bodies he identified as Roman soldiers, still with their equipment and their last pay in their purses, and nearby another armored skeleton interpreted as one of the Sasanian attackers.*

It seems the Romans realized the Persians were digging a tunnel below the town’s wall, and tried to stop them by digging their own tunnel and stop the Persians underground.

But the Persians knew what the Romans were trying, and put in place a terrible trap in the tunnel:

Just as the Romans heard the noise of the Sasanians working beneath the ground as they neared the walls, so the Persians heard the Roman counterminers approaching and planned a nasty surprise for them. 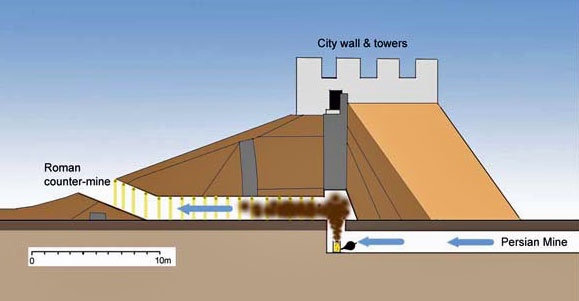 As pictured (…) they placed a brazier (a pan for holding hot coals) in their own tunnel below the shaft leading up to the tower (where they had started removing foundation stones). As the Romans broke through, the Persians retreated into their approach tunnel and threw onto the brazier “some of the bitumen and sulphur crystals we know they had because they were using them, probably just minutes later, to set fire to the Roman tunnel.”

The Roman assault party were unconscious in seconds, dead in minutes. Use of such smoke generators in siege-mines is actually mentioned in classical texts, and it is clear from the archaeological evidence at Dura that the Sasanian Persians were as knowledgeable in siege warfare as the Romans; they surely knew of this grim tactic.

And there you are: the bones of the oldest known victims of a chemical attack.