THE BEST WAY TO MAKE THEM WITH THE CALLING LOUD THE 99 NAMS OF GOD BESIDE YAHOVA HE HAS 99 NAMES YOU CAN SEARCH THEM IN THE ISLAMIC FAITH UNDER 99 NAMES OF GOD AND CALL EACH  NME LOUD AS POSSIBLE ON THE SORD OR KNIFE YOU MAKE OVER AND OVER AND BLESS IT WITH  NAME OF HIS ANGELS ONE oR MORE , It will take you some time as more you read and more you call on the power of almighty to make the blade  as holy as possible for the good attention using rainwater also with reading of the name on it and wash the blade with 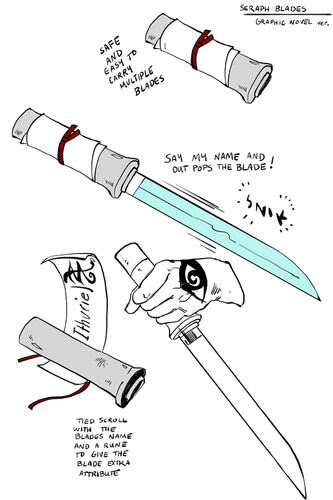 Seraph blades are the primary weapons of the Shadowhunters. They are made of adamas and crafted by the  Iron Sisters. They call upon the power of angels’ names to access the power of the blades.

Before the blade can be used, a Shadowhunter must name it to invoke its power. Any angel’s name, except for Raziel‘s, can be called upon. Within the Shadowhunter community, it is often believed that when a Shadowhunter names a seraph blade, the blade not only becomes engulfed by heavenly fire, but some of the named angel’s spirit is infused into the blade as well.

Seraph blades are activated when their name is called. It is said to be stronger the louder the angel’s name is called. Seraph blades are an efficient way to kill demons and Downworlders. However, they do not work and disintegrate, when used on the finalized version of Mortmain’s mechanical automatons, despite the fact that these mechanical beings were run and possessed by demons. Seraph blades are also unable to work in the land that has been blighted by the  Unseelie King’s magic. When used against a mundane, the seraph blade has been observed to be vastly overpowering, causing the mundane to burst into flames upon the first blow.

Although they are chiefly for the killing of demons and rogue Downworlders, seraph blades are known to also affect angels.  Ithuriel once used Jace’sseraph blade to commit suicide on Earth and be sent back to Heaven.[3]

Seraph blades can also be used to create a  Malachi Configuration.

According to Shadowhunter legend in the earliest days of the  Iron Sisters, when they were few in number and their  Adamant Citadel was no more than a single Adamas forge and a few protective wards, a lone Iron Sister was confronted with a  Dragon demon in the Citadel. In her desperation, she picked up and pointed an unprocessed Adamas jag at the Dragon, and prayed to the ArchangelMichael, making the Adamas unexpectedly burst to life as a sword. It bored through the Dragon’s neck, engulfing it in a heavenly fire. She then deduced what had just happened, and by the time her fellow sisters returned to the Citadel, she had drawn up the first set of plans for the seraph blades.

The seraph blades are, when deactivated, dull tubes with blunt edges. When activated, the blade springs to life, growing into a bright, glowing, clear dagger. They vary in length, from small ones like daggers to long ones like swords.

All the seraph blades ever called in the series, listed alphabetically, with the series book/s they were included in linked in the adjacent reference. For more angel names, go to the section on the separate Angels page.

Things You Should Know If You Want to Destroy a Demon

Destroying demons takes skill, determination, and nerves of steel. We’ve put together this basic guide for those who are new to Nephilim but be warned, it will take years of hard work and training before you can take on the demon world.

They envy human life, but then again who doesn’t?

2. If a Mundie is unfortunate enough to cross a demon, they are nothing but prey to them.

I mean, what do you expect when something looks so delicious.

3. Demons can’t be permanently harmed by earthly weapons so if this was your plan, you might need to rethink it.

Yes, Clary, we were just as horrified as you!

4. Shadowhunters’ weapons are designed for the sole intent of killing demons.

Might we suggest a fabulous little thing called a seraph blade?

5. Engulfed by heavenly fire and infused with angels’ spirits, the seraph blade is lethal to demons.

Poor demons, they always get such a bad wrap!

6. If you’re unfortunate enough to find yourself at the hands of a demon without a trusty seraph blade, try forcing a demon into the sunlight.

FYI This has to be actual sunlight. Sadly they won’t bat an eyelid if you charge at them with a flashlight.

7. Or why not try some holy water? That’ll help you banish most demons!

8. There are other ways, of course, but you’re going to have to wait to find out…

9. Failing all of the above, you can always try calling on the power of an angel.

Successfully destroying a demon isn’t easy. It takes a creative mind to come up with new and inventive ways to take them out. Let us know your ideas in the comments box below!